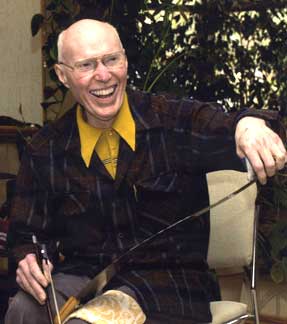 "I honestly enjoy
playing the saw."

I remember as a small child attending the Highland Avenue grade school in New Castle, Pennsylvania (which is long gone). A man came and talked during assembly about American Indians. He froze a banana in liquid oxygen and actually drove a nail through a board with the frozen banana. He also played the saw. I found it fascinating.

The next time I heard someone play the saw was when I was in my 50s. At a noon meeting of the Meadville, Pennsylvania Rotary Club one of our members brought a saw and played it for the entertainment. That night I went out to the barn where we kept a couple of horses and a pony. I cut some hair off one of the horse's tails and stretched it onto a stick. Then I rounded up a saw and went back into the house to attempt to play. With a few tips from my Rotarian friend and a suggestion or two from my wife (who had seen someone on TV play the saw) I taught myself to play in a few evenings.

I do woodworking as a hobby, so I already owned a saw, in fact several saws. And it was one of these that I learned on. As I became more proficient, I realized that my homemade bow was not sufficient, so I purchased an inexpensive student's violin bow. I still have that bow – as I recall it cost about twenty dollars. I also wondered if there were better saws to play. One day I took my bow into town to the hardware store and tried all the saws. I attracted quite a crowd, but found the saw that I am still using today. It was an inexpensive saw – it cost me $12.50.

Saw players for the most part do not take themselves seriously. We make beautiful music – but after all, it's just a saw. There's no prestige associated with it so when we make a mistake (and we all make mistakes) we laugh and make a joke about it, but people love it. I contend that it's like pure cream – a little is good but you can tire of it very quickly.

I like to think that when I leave this veil of tears I will make my way through the harp players to the very bottom end of the banquet table and play along on my saw. The Carpenter who sits at the head of the table on his throne will hear me and will say, "Hey John, we've been waiting for you. Welcome to heaven. Move up a little closer to the center of the table so we can all hear you a little better."